This is the latest in a blog series. Find the whole series here. 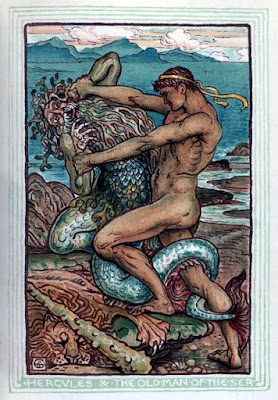 There is a figure in Greek mythology called Proteus, a minor sea god with two remarkable powers: shape-shifting and oracular utterance. To get the truth out of him, however, one must first catch him. When anyone attempts to grasp him, he rapidly changes from one form into another in an attempt to evade his captor’s clutches. But if a person is tenacious enough to hold on until Proteus tires and resolves into his true form, the god will render up the truth his captor seeks.

Orally transmitted stories share with this mythical sea god a “protean” character. Handed on by word of mouth, each time a story is told the teller gives it a slightly different form and a different shade of meaning, so that over time many different versions of the same story emerge. The literary author who works from an oral tradition is like the hero who captures Procrustes: first he must wrestle with the many versions of the story, but when he finally confers upon it a fixed form, he is able to make it serve him to convey a particular truth.

Taken out of context, the accounts of a great flood that nearly destroyed all living things bear a striking similarity to one another. But in this blog series, I’ve taken pains to put each story in its proper context, in order to see what meaning each writer found in it. I hope that, having looked at the meaning in the Epic of Gilgamesh and in Ovid’s Metamorphoses, we will now be able to see more clearly what makes the Biblical story of the Great Flood stand out from the others. First, though, it might be good to recap what we have learned about the significance of the Flood as it is presented in the other two poems. 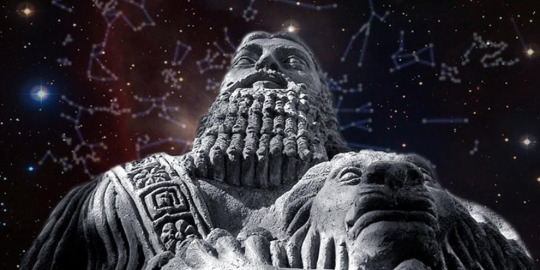 Gilgamesh grasps at immortality, but seizes on wisdom

We saw that the flood story in the Epic of Gilgamesh is  presented by Utnapishtim as an object lesson for Gilgamesh, to dissuade him from his mad pursuit of immortality. Gilgamesh, a great king who is “two-thirds divine, and one-third man,” becomes obsessed with immortality after the death of his great friend, Enkidu. Enkidu, struck down by the gods, shares death-bed visions of what awaits him after this mortal life: a great nothingness of rotting bodies and oblivion, something the immortal gods will never suffer. In his determination to escape this dismal fate, Gilgamesh abandons his city to seek out the only man who has ever escaped death, Utnapishtim. A god bestowed immortality on him after he and his wife survived the gods’ destructive flood, but what was intended as a blessing turns out to be a kind of curse. Forced to live far from mortal men, an outcast from the restored human race, Utnapishtim lives an unnatural life of never-ending loneliness. Although he intends to story to dissuade the king from seeking a similar fate, Gilgamesh is not immediately convinced. Eventually, though, he becomes reconciled to the inescapable brevity of human life. This knowledge is the only lasting trophy that he takes with him as he returns to the great city over which he reigns. From now on, he will seek immortality only through the lasting nature of his kingly achievements.

In contrast to the crude but powerful Gilgamesh epic, Ovid’s lengthy poem, Metamorphoses, written nearly two thousand years later, is both more finely wrought and apparently less philosophical. A careless modern reader might easily dismiss Ovid’s poem as an artful mishmash of Graeco-Roman mythology, with an emphasis on erotic love. By focusing on one small section of the rambling poem, however, we saw that there is a more serious, philosophical theme pervading the poem just below its artful surface. Ovid’s account of the Great Flood suggests both the cruelty and capriciousness of the gods — a theme amply illustrated throughout the poem — and the human virtue that allows mere mortals to endure the vicissitudes of life.

In order to emphasize this meaning of the flood story, Ovid leaves out an important detail that most earlier versions of the myth included: he does not say that Deucalion and Pyrrha owe their survival to the forewarning of Deucalion’s immortal father, Prometheus, nor that Prometheus instructed them to build a great chest and fill it with provisions to sustain them after every other source of food has been destroyed by the flood. Instead, Ovid makes it seem as if nothing more than a divine whim ends the flood before they too, last of all mortals, perish in the waters that have destroyed every other living thing.

While the poet, on the one hand, suppresses this important detail, on the other hand he emphasizes another, namely the way the elderly couple replenish the world’s human population. So that the reader does not miss the point, the poet interprets the significance of their producing offspring from stones: “[Thus} the toughness of our race, our ability to endure hard labour, and the proof we give of the source from which we are sprung.” In this way, he harmonizes the meaning of the Flood story with the overall theme of the poem: life consists of constant change, but we mortals, whose life is short and at the mercy of the gods’ fickle affections, are tough enough to endure it all.

We can see that both of these poems, so different from one another, share a preoccupation with human mortality. In fact, in the understanding of the ancient world, mortality was the one characteristic that distinguished men from gods. Both poems suggest that the way to get the most out of life is to accept our human limitations and learn to rejoice in them. We are not gods, nor should we seek to be — how much better to be the best kind of humans!

Next time: A distinctive view of Man and God

In the next post, we’ll look at the Book of Genesis, which provides the immediate context for the Biblical story of of Noah and the Flood. When we do, it will be clear that the Biblical author, working from the same fund orally-transmitted myths that provided story elements for the Babylonian Gilgamesh poet and Roman Ovid, draws a radically different meaning out of them. Perhaps that meaning will help to explain why the story of Noah continues to capture the modern imagination, while the tales of Deucalion and Utnapishtim remain relics of cultures long since lost in the dust of time.

This post originally appeared on my literature blog, A Catholic Reader.

Click here to find links to all the posts in this series.

This site uses Akismet to reduce spam. Learn how your comment data is processed.